Joined Sep 5, 2010
·
18 Posts
I recently became the proud owner of a 2006 GL1800 - my first bike in about 25 years! The bike is in great shape, but the knob on the left side to adjust the aim of the headlights doesn't seem to do anything. Is this a common problem? Is there a common fix or a couple places I should look? Thanks for any advice!

Joined Jun 5, 2010
·
7,671 Posts
Welcome & greetings from Florida.
You may have a bad headlight adjuster switch, there is a gray connector (14-P) under the left storage compartment. You could also have a loose connection or corrosion on the pins and socket.
You test the switch through the following wires, yellow/red and blue/green there must be a resistance value of 4.0-6.0 ohms; if not switch is bad and must be replaced.
Test 2 is between blue/green and yellow/blue the resistance in ohms should vary, if not switch bad.

Joined Apr 28, 2010
·
1,168 Posts
not to be a [email protected]@, but make sure the bike is running when you see if they are moving when you change the dial. somehow I learned this the hard way.
B

Joined Sep 5, 2010
·
18 Posts
Thanks - went out to tear it apart and check Trike Lady's testing, was sure I had tried those light while it was running - but just in case. Yep - They work fine when the engine is running.

Joined Oct 3, 2009
·
346 Posts
Don't know about the rest of you, but I had to adjust my low beams up because the factory setting was way too low, even with the adjuster set to the highest position. Aimed them at the wall and watched them climb as I ratcheted them up. Got lucky because they were perfect the next time I rode after dark.
C

Aiming the low beams to where you think you get the best lighting may make the upper beams aimed illegally in a lamp that contains both high and low beam bulbs and they are not independantly adjustable.
In any case, upper or lower beam hot spots must not be aimed above horizontal(actuall a little below) or you stand the chance of blinding on coming vehicle drivers.
If anyone wants to look up the aiming laws, they are contained within FMVSS paragraph 108(Federal Motor Vehicle Safety Standards)
W

Joined May 7, 2020
·
1 Posts
I came across this thread looking for answers to my right headlight adjuster running continuously when I fired up the bike. I unplugged the headlight adjustment switch and it stopped. I did a resistance check on the switch and it looks like it’s junk. I guess it’s off to the salvage yard, since Honda will only sell me the entire panel for about $250. 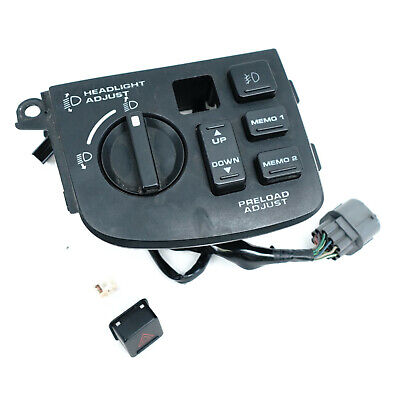